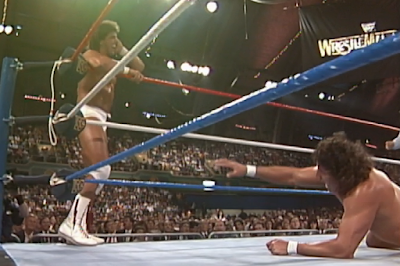 I know what your initial thought is here. “What the hell – DJ starts off his blog with two epic classics, and for his first WWF/WWE entry, he picks a meaningless throwaway tag team match from a horrible WrestleMania? What gives?”

Look, it's easy and fun to write about classic matches. Flair/Steamboat, Omega/Tanahashi – the stories are right there, in plain sight. Deconstructing them is a blast, and hopefully someone who hasn't seen those matches is encouraged to check them out. In the same way, though, it's a fun challenge to look at the undercard and mine the gold that happens in matches that are immediately forgotten because of the overall focus of the show.

The beauty of pro wrestling is in the art of telling an athletic story inside the conventions of a match, and in a 20, 30, even 60-minute contest, there's plenty of time to let that story breathe and develop within three acts. But what if you're on the undercard and the bookers and producers tell you you have nine minutes to tell your tale?

Back in the 1980s peak of Hulkamania-era WWF, the 17-minute main event of WrestleMania V qualified as an “epic” (which is especially amusing when considering that the Flair/Steamboat best-of-three-falls match was on the same day). So working a televised match in the WWF in this era usually meant that you were going to get ten minutes or less to get your point across in the ring. Judging by the quality of the average WrestleMania match in this era, either this was extremely difficult to accomplish, or no one really tried very hard. So it stood out a few years ago, during a writing project where I was watching all the early 'Manias, that the teams of Strike Force (Tito Santana and Rick Martel) and the Brain Busters (Tully Blanchard and Arn Anderson) managed to tell a cool little tale with subtle story beats in the span of about nine minutes.

Has a wrestling match ever made you cry?

I'm sure there are plenty of examples of storyline beats before and after matches that have triggered the waterworks – watch the crowd shots when Randy Savage and Elizabeth reunited after Macho Man vs. Ultimate Warrior at WrestleMania VII, or when the Golden Lovers reunited at the New Beginning in Sapporo in 2018. When Daniel Bryan returned to the ring at WrestleMania 34, I was practically sobbing during his entrance, and don't even get me started on the video package that played before Sasha Banks vs. Bayley at NXT Takeover: Brooklyn. But when's the last time the actual in-ring action brought you to tears? I'm not sure when it was for me, but I know I got damn close at the conclusion of the main event of this year's Wrestle Kingdom 13.

Over 30-some-odd years, I have been fortunate to meet fellow fans across the spectrum of wrestling fandom. Marks who stick to kayfabe, smart marks who follow every dirt sheet or blog. Jaded wrestlers who like to work every fan they meet, and cordial grapplers who are fans themselves, just as eager to mark out over the classics. Fans of Southern wrestling, Lucha Libre, “sports entertainment,” puroresu, hardcore, and “the flippy shit.” Young fans who love it all, and old timers who think that today's matches are more about spotfests than storytelling. No matter what they're into, if they go into their wrestling shows looking for some sort of emotional connection with the art unfolding in front of them, I am their kindred. Like a great song or film, if a match moves me, i'm it's slave.

There are those among my fellow old-timers who would argue that today's popular wrestling matches are more about spectacle than story; more car crash than ballet. And sometimes they're right. But some of those car crashes can tell thrilling stories in and of themselves—maybe not in the same way a classic old-school match may work a body part, but there's more than one way to spin an effective yarn.

The generational debate between old-timer and today's fan framed the main event of this year's Wrestle Kingdom, as a defender of the old guard, Hiroshi Tanahashi, the “once in a century” Ace of New Japan Pro Wrestling, challenged IWGP Heavyweight Champion Kenny Omega for the gold that Tana had worn seven times before, while simultaneously defending his concept of tradition and old school pro wrestling against Omega's desire to “change the world.” To many, the clash seemed a bit like inside baseball, an esoteric debate too cerebral to be worthy of the main event of New Japan's marquee annual event. How could a debate about wrestling philosophy sell tickets, much less get a crowd invested? Well, when the two combatants involved are a living legend and Japan's hottest gaijin wrestler, the match sells itself. It's up to them to figure out what the hook's going to be.

As it turned out, the debate about how best to tell an in-ring story ended up putting my friends and I through the emotional wringer. But interestingly, it's not the story some of New Japan's American audience wanted to see—and maybe that was part of why it was such a roller coaster .

Read more »
Posted by DrAwkward at 8:27 PM No comments:

Ric Flair vs. Ricky Steamboat 4/2/89 – 2 out of 3 falls for the NWA World Heavyweight Title – Clash of the Champions VI: Ragin' Cajun 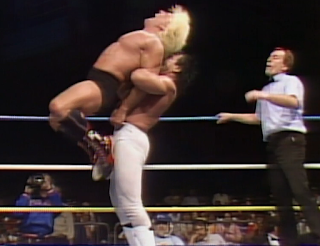 Like many Midwestern children of the 80s, my introduction to professional wrestling was courtesy of the mainstream rise of Hulk Hogan and the World Wrestling Federation. Sure, there were kids cooler than me with bitchin' parents that took them to see the local AWA shows when they were kids, but I was not among that elite sect that knew of the Hulkster or Bobby “The Brain” Heenan or “Mean” Gene Okerlund before they were swept up in Vince McMahon's quest for world domination. So for me, it was a babysitter that let me stay up late enough to see Hogan and Paul Orndorff escape a cage at the same time on Saturday Night's Main Event. That was exciting enough (and the boys in my 7th grade class debated feverishly the following Monday whose feet hit the floor first. “Hogan's legs were bent! Orndorff's were straight!” Man, Jesse Ventura really thought that made a difference, didn't he?), but it wasn't until later that year, when the Intercontinental Champion, The Honky Tonk Man, besmirched the virtue of former champ Randy Savage's manager, the lovely Elizabeth, that I got hooked.

The “Macho Man” took on Honky Tonk's stablemate, Bret “Hitman” Hart, on a November 1987 edition of SNME, and the ferocity displayed by Savage while defending his manager's honor was captivating, eventually leading me back several months to a VHS copy of WrestleMania III rented from the gas station down the street. And that's what led me to probably the best WWF match of the 1980s—Randy Savage vs. Ricky “The Dragon” Steamboat for the Intercontinental Championship. And if Randy Savage was a crucial discovery, well, Savage vs. Steamboat was a revelation.

Until Savage vs. Steamboat, the wrestling I had seen (with the exception of Savage/Hart) was mostly cartoon characters punching each other, much like that Hogan/Orndorff cage match. But this—this was a pair of athletes trying to one-up each other, to prove who was the best...with a healthy dose of babyface revenge thrown in for good measure. Recovered from a vicious attack on his larynx months earlier, Steamboat came at Savage with passion and drive, seemingly trying for a pin every 10 seconds  (in fact, that match featured 22 near-falls in 14 ½ minutes of action) and pointedly lifting Savage up by his throat early in the contest. This was skill, storytelling, and wrestling that finally blew my brain open—and I needed more.

Read more »
Posted by DrAwkward at 9:53 PM No comments: