Kazuchika Okada vs. Taichi 2/2/2020 - NJPW The New Beginning In Sapporo

So there's this guy in New Japan Pro Wrestling named Taichi. I hate him. He is probably my least favorite wrestler in the company (which is saying something because Jay White is also in New Japan). He's a heel, so it's quite possible that he's doing his job well and I'm being worked, but his character is one of those where you really can't tell if the heat he's generating is "go away, we legitimately don't want to see you ever and think you're bad at your job" X-Pac heat, or if he's working us all to think that he sucks (which, if we're being real, X-Pac sorta did too). Because here's the thing about Taichi: he's lazy as fuck. And not in a chill, nonplussed Orange Cassidy way; he's lazy and also carries himself like he deserves to be handed success on a silver platter, which is annoying as hell.

In a company that consistently produces dazzling displays of five-star athleticism, Taichi barely tries in his matches. He uses chairs and low blows, which is a greater crime in New Japan than in most American companies. He uses his valet, Miho Abe, as a human shield, because he's a coward. He puts more work into his gimmick and his Phantom of the Opera ripoff costume and entrance than he does his ring work, and even then, he can't be arsed to lip-sync his shitty entrance music while "pretending" to sing it. It is the most half-assed ring entrance ever and it is infuriating. In a company where the best in-ring workers get pushed to the moon, Taichi chooses to be a character instead and still mails it in. When Kevin Kelly puts him over on English commentary as a deceptively talented worker who just doesn't apply himself, it sounds like bullshit, because he's never shown me anything other than a disturbing affinity for removing his tear-away pants mid-match. 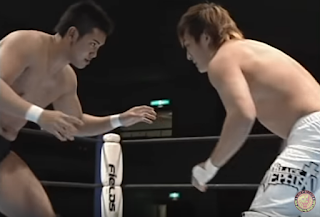 But Taichi wasn't always a fake opera singer - once upon a time he was Taichi Ishikari, a scrappy journeyman who began his career as a junior heavyweight in All-Japan Pro Wrestling before spending some time bouncing around New Japan on the occasional show, and on one fateful day in 2008, he met, and defeated, a debuting young lion by the name of Kazuchika Okada.

Okada today, of course, is the five-time IWGP Heavyweight Champion and the centerpiece of the promotion, having already, at age 32, held the top championship for more combined days than anyone in history. His matches with Hiroshi Tanahashi and Kenny Omega are the stuff of legend. Heck, on his return in 2012 from a learning excursion in TNA (during which Taichi went on his own voyage to Mexico), the newly-minted Rainmaker immediately challenged, and defeated, Tanahashi to win the IWGP Title and leapfrog the entire NJPW roster - including a certain lip-sync sensation who defeated Okada four years prior.